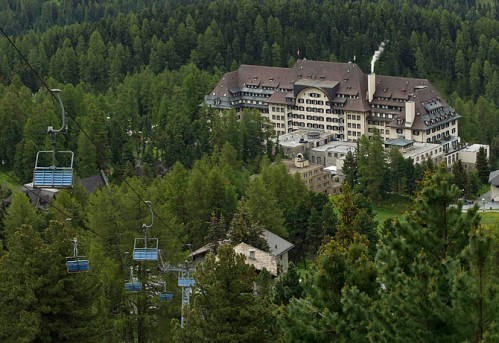 
“It is no longer confined to the myth of the Jewish conspiracy, but it now touches all population categories…”

(ST. MORITZ) — Dominique Strauss-Kahn will not be stepping out of a limousine this year. That much is sure about this year’s Bilderberg conference, which the former IMF chief, awaiting trial for alleged sexual assault of a hotel maid in New York, is said to have attended several times in the past. But little else is known about this secretly organized, unofficial meeting of some 100 powerful figures, slated to take place June 9-12 in a luxury hotel in the Grison station. Indeed, not even the dates of the gathering are confirmed.

The canton is to ensure the tranquility of its guests with the help of the Federal security service. Two of its ministers will take part in some of the discussions. But the canton is not commenting on the measures in place or the cost of the operation.

The Bilderberg group is one of the world’s most famous clubs, it gathers bankers, politicians, industrialists, media moves and shakers, scholars and billionaires in a different location each year, usually in Europe. All the attendees share one condition of membership: discretion.

Created in 1954 by Prince Bernhard of Holland in order to bring together European and American elites, this annual meeting is named after the hotel of the Dutch village Oosterbeek where it took place for the first time. Henry Kissinger, Helmut Schmidt, Gerhard Schröder, Daniek Vasella, the heads of Coca-Cola, Shell, Fiat and even the Queen of Holland are among the participants regularly mentioned. What do they do there? What do they want?

Decade after decade, the Bilderberg group has fueled all kinds of speculation. Multiplied on online forums, these hypotheses, sometimes denounced as “conspiracy theories”, spread the idea that a powerful minority is carrying out its plan for a new world order. The idea is that important political and economic decisions are being made behind closed doors, with no democratic control. With the Bilderberg conference bringing together important politicians from left and right, some rumors say the group recommends future heads of state. Bill Clinton, Lionel Jospin, and even José Manuel Barroso, were invited to join shortly before they came to power.

“The conspiracy theory is absurd,” said the former federal counselor Pascal Couchepin, one of the Swiss politicians to have participated in these conferences. “We spend three days trying to better understand the world thanks to meetings that I would describe more as intellectual than political. We are away from any pressure.” (See pictures of world leaders on vacation.)

Le Valaisan, invited “four or five times”, mainly remembers fascinating discussions about French history, or encounters with people like Olivier Roy, an expert on Islam. Another Swiss politician, Christoph Blocher, is usually skeptical about international collaboration, but shares the same opinion. Invited to a meeting in Athens where he rubbed shoulders with the head of Coca-Cola, the King of Morocco’s daughter and the Swedish Secretary of State Carl Bildt, he appreciated “the excellence of the orators and the frankness of the debate”. A vestige of the Cold War, the only drawback of the meeting could be that the Chinese and the Russians are still missing.

But the St. Moritz conference does disturb certain representatives of the Swiss political party UDC. In March, the national counselor Dominique Baettig filed an interpellation cosigned by Oskar Freysinger and Yves Nidegger, among others, denouncing “sopra-national and non-transparent governance.” The politician justifies his action: “this kind of gathering of powerful people of the globalized world goes against our principles of sovereignty.

Criticisms about circumventing democracy are especially sharp this year, in the context of the Arab revolutions. Moreover, the cost for the Swiss taxpayer is kept secret. The Federal Council answered that it was not part of its role “to pass judgment on information policy carried out in relation to private manifestations.”

Much more exclusive than Davos

This exclusive version of the Davos World Economic Forum has already been held twice in Switzerland. It is organized by a steering committee of about 20 people, which now includes Josef Ackermann, CEO of Deutsche Bank, and Daniel Vasella, CEO of Novartis. Experts are invited along with the guests. Each participant has a limited speaking time and the debates are graded to guarantee their quality. Another tacit condition is a command of the English language.

In the past few years, the mystery surrounding the Bilderberg group has faded slightly because of interest from journalists. Despite the confidentiality protecting it, the group publishes its discussion themes and participants after the meeting online at www.bilderbergmeetings.org. But the defenders of the “conspiracy theory” who keep denouncing the “Illuminati” are still active.

“This conspiracy spirit is also due to an official authority crisis. It is no longer confined to the myth of the Jewish conspiracy, but it now touches all population categories”, says Bruno Fay, journalist and author of a book on the “plot-cracy” who met the current Bilderberg director, the Belgian Etienne Davignon. Rather than making decisions, the Bilderberg meetings are a way to sound out opinions on current affairs, some say. “And the members are also asked to identify rising personalities in their country.”

Another custom evoked is the invitation of the president of the host country. The communication services of the President of the Confederation say that “Micheline Calmy-Rey will not participate in the Bilderberg meeting which will take place next week in St. Moritz.” For their part, the young socialists will be present behind the scenes of the meeting. For several weeks, they have called for a demonstration on June 11, on the main square of St. Moritz, to sign a manifesto in favor of greater democracy. Lukas Horrer, president of the Social Democratic Party’s youth organization Grison Jusos explains: “We don’t agree with the conspiracy theory. We just want to remind people that democracy has to prevail in the economic world.”