History of the Masonic Temple in Philadelphia

One of the wonders of the Masonic world is the Masonic Temple located at Broad and Filbert Streets, adjacent to City Hall Plaza in Philadelphia.

Since its dedication in 1873, this architectural jewel has attracted hundreds of thousands of Brethren and visitors to the mother city of Freemasonry in America. The magnificent Temple, which is the home of The Grand Lodge of Free and Accepted Masons of Pennsylvania, is unlike anything else in the nation, or the world, according to architects and artists, structural engineers and scholars. The majestic turrets and spires of the Masonic Temple stand out symbolically as they form part of Philadelphia's center city skyline.

Freemasonry evolved from a line of Master Builders, and the Temple, from pavement to turret and all through its halls, speaks in the language of architecture. Our mystic ancestors in Egypt, Greece, Italy, Germany, France, Scotland and England are all suggested by the designs which distinguish the Lodge rooms.

On July 1, 1867, The Right Worshipful Grand Lodge of the Most Ancient and Honorable Fraternity of Free and Accepted Masons of Pennsylvania and Masonic Jurisdiction Thereunto Belonging purchased the site for the Temple. The plot, 149 by 245 feet, includes a complete block bounded by Broad, Filbert, Juniper and Cuthbert Streets, and was purchased for $156,793.16 (Records of the Building Committee of the New Masonic Temple). Brother James H. Windrim, a Member of Philadelphia Lodge No. 72, was the architect. The Temple cost $1,600,000.00 exclusive of decorations and furnishings.


The Cornerstone was laid on Saint John the Baptist's Day, June 24, 1868, in the northeast corner of the foundation wall by Brother Richard Vaux, Right Worshipful Grand Master. The granite Cornerstone, from the Havre-de-Grace quarries, is five feet 6 1/2 inches long, two feet 4 1/2 inches deep, and four feet 9 1/2 inches wide. It weighs between nine and ten tons. The Gavel used on this occasion was the one Brother George Washington used to lay, with Masonic ceremony, the Cornerstone of the Nation's Capitol at Washington, D.C., on September 18, 1793.


The Temple was Dedicated on Friday, September 26, 1873, the eighty-seventh anniversary of the independence of The Grand Lodge of Free and Accepted Masons of Pennsylvania, by Brother Samuel C. Perkins, Right Worshipful Grand Master. A Masonic parade, divided into twenty-six divisions and including 14,000 marchers, was held in honor of the Dedication.

The exterior of the building at Broad and Filbert Streets is of Cape Ann syenite, which takes its name from Syne in Upper Egypt, where it was quarried for monuments by the ancient Egyptians. The Juniper and Cuthbert Street exteriors are of Fox Island granite from the coast of Maine. In accordance with Masonic tradition, the stones were cut, squared, marked and numbered at the quarries and brought to the Temple ready for use.

The two Grand Towers are extremely prominent and are known as the Northwest and Southwest Towers. The height of the Southwest Tower at Broad and Filbert Streets is 250 feet. It was necessary to lay the foundation thirty-one feet below street level.

Elevations on Broad and Filbert Streets are perfect specimens of Norman architecture -- bold and elaborate. The elevations on Juniper and Cuthbert are beautiful and impressive, but plain, due to the narrow streets.

Inside, on the north side of the building are the private suite of the Right Worshipful Grand Master, the Grand Banquet Hall, and Oriental Hall. On the south side are the offices of the Grand Secretary, Grand Treasurer, and the administrative staff of the Grand Lodge. More offices are upstairs on the third floor, also on the south side: those of the Grand Holy Royal Arch Chapter, Grand Commandery of Knights Templar and the Ancient Accepted Scottish Rite's Valley of Philadelphia.

On the second floor of the Temple are Corinthian, Renaissance, Ionic, Egyptian and Norman Halls. Gothic Hall is on the third floor. From the eastern end of the second floor corridor, two curved cantilevered stairways lead to the third floor, whose corridor has many panel decorations representing varied types of ancient architecture and embellishments. The stairwell walls are decorated with murals--depictions of celebrated masterpieces of ancient Egypt, 2000 B.C.; Assyria, 900 B.C.; Athens, 600 B.C.; Rome, 500 B.C.; Jerusalem, 700 A.D.; Roslyn Chapel, 1200 A.D.; Temple of the Dioscuri and Temple of Vesta. At the other end of this magnificent stairway, in the basement, are seven committee rooms, offices, four banquet rooms, a large kitchen, shop and other mechanical equipment.

Corinthian and Renaissance Halls, what is now the Benjamin Franklin Room, the Grand Banquet Hall and the Grand Master's suite were completed under the direction of the Committee on Temple. Gothic Hall, in the beginning, was decorated largely by contributions collected by Commanderies meeting in Philadelphia. 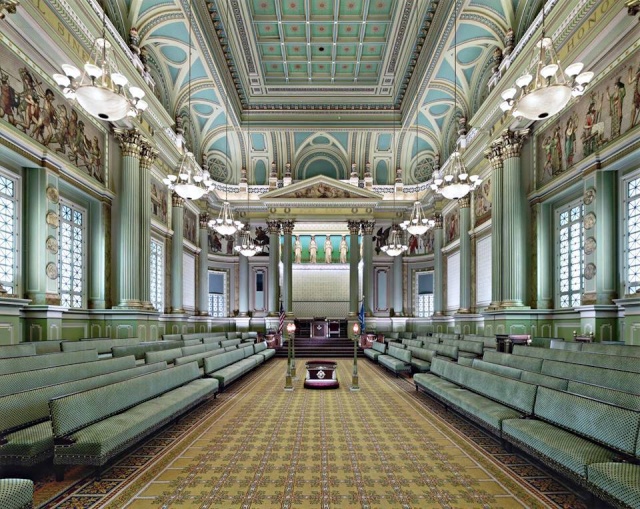 Upon arriving on the second floor, one encounters the Meeting place of the Grand Lodge of Pennsylvania: Corinthian Hall. The features of this magnificent room, finished in 1903, are in strict conformity with the principles of Grecian classical architecture, and the best known examples of the Greek Corinthian Order. Columns and capitals are modeled after the perfect ones found in the monument of Lysicrates in Athens. The paneled ceiling in the apse at the east end of the room together with the Caryatides supporting it, depict the Portico of the Caryatides of the Erectheum, a building on the Acropolis, in Athens. Seats on the platform in the East are in accordance with those in the ancient Theatre of Dionysus, also in Athens. Various subjects for the bas-relief medallions over the entrance hall and on the pilasters on the north and south walls were taken from ancient Greek coins and medallions. Pictorial representations in the panels on the large frieze running around the four enclosing walls of the room are copies of historical fragments from Greek mythology relating mostly to spiritual life. The general color scheme of the architectural motif, from floor to ceiling, is dull ivory with gold to accentuate all relief and figure details. The large cove and ceiling are treated in shades of deep blue, studded with gold stars. This creates a sky effect above the line of lattice balustrade, and gives an atmosphere of an open hall in an ancient Greek temple. 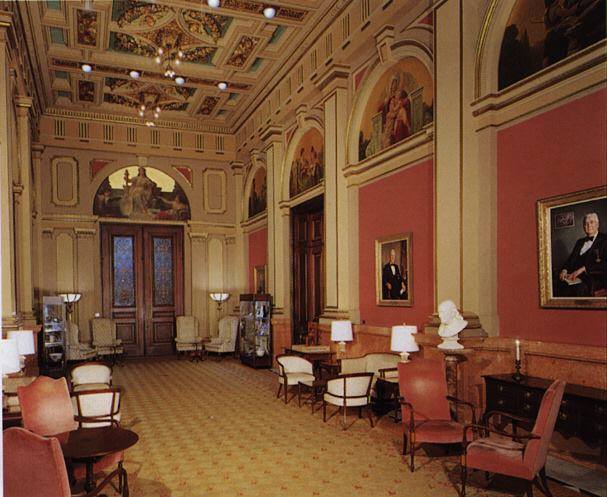 "These huge bronze doors, each weighing one ton, open into the Benjamin Franklin Room."

"With an unusually elaborate ceiling, this room is comfortably furnished for the members and their guests. Oil portraits of the living Right Worshipful Past Grand Masters decorate the walls. Eleven murals have also been painted far above the portraits. This room originally was the Museum of the Masonic Temple. 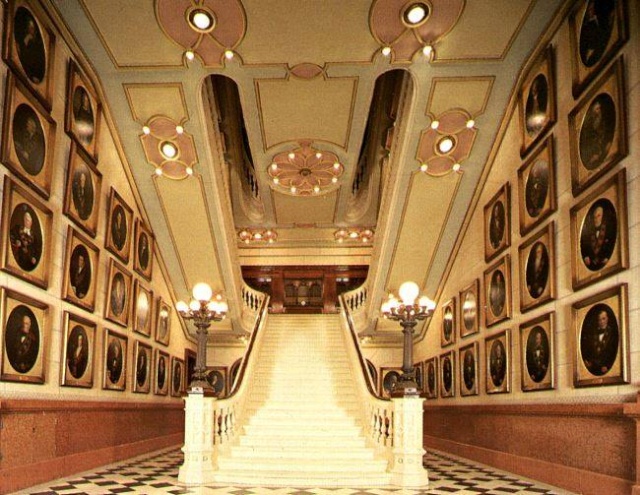 
"Since we have returned from the lower level, you should know that this staircase was cast in place, and goes all the way to the third floor. What you see here is directly across from the Ben Franklin Room. On the walls, all the way up the staircase, are portraits of most of the Past Grand Masters of the Grand Lodge." 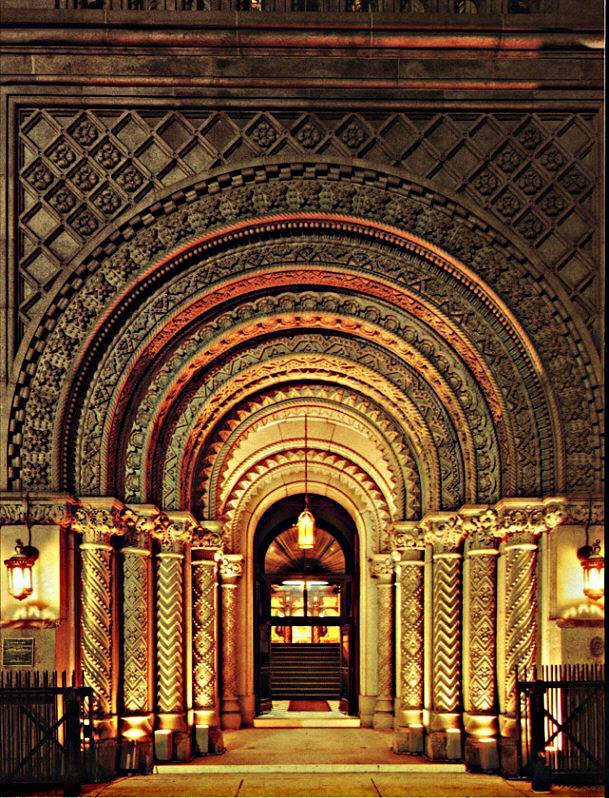 
"When you entered the Temple, you came through the Grand Entrance Gate, from North Broad Street. If you don't know much about architecture, you can't help but learn when you visit the Masonic Temple.


"The architectural style of the Grand Entrance Gate is Norman. The doors are each seventeen feet high, seven feet wide and six inches thick. Along the inner steps of the Temple are two large bronze sphinxes. I don't know if they have names, but they are very impressive..." 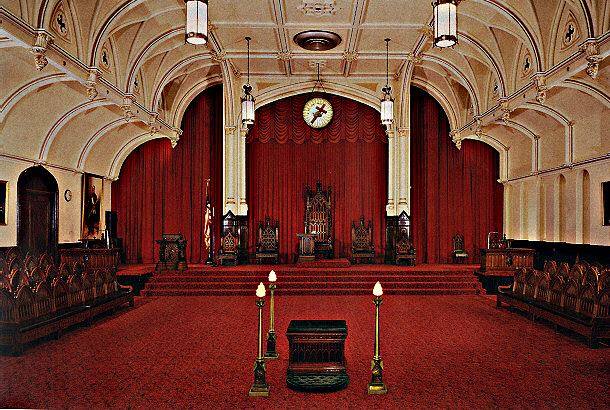 Gothic Hall has all the characteristics of the architectural style for which it is named. The groins, pointed arches, pinnacles and spires appear in every part of the room. The Cross and Crown, emblem of the modern Knights Templar, hangs above the Commander's throne (a replica of the Archbishop's throne in Canterbury Cathedral.) The Latin inscription around the emblem means, 'In this sign you will conquer.' The pictures on the walls are of Past Grand Commanders. The wainscoting is of oiled pine, and all the furniture is hand-carved.

"As of October 1981, Gothic Hall is also the home of the Valley of Philadelphia of the Ancient Accepted Scottish Rite." 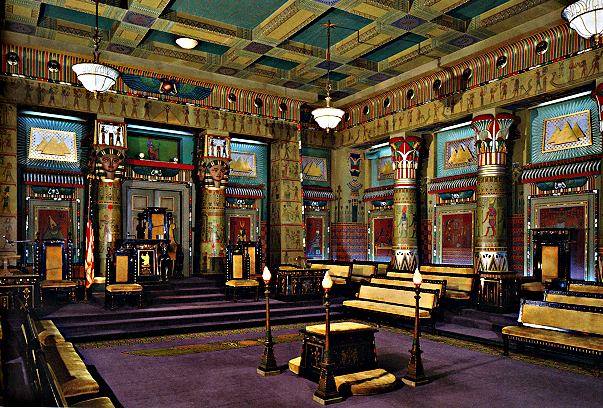 "Egyptian Hall was finished in 1889. It is decorated in the style of the Nile Valley. Twelve huge columns stand on the four sides of the room, surmounted by capitals peculiar to the Temples of Luxor, Karnak, Philae and others. The furniture also is in Egyptian style. The Worshipful Master's throne is gilded ebony; the pedestal is flanked by sphinxes.

"The ceiling is blue, indicative of the heavens. A solar disk is placed in the East. Representations of the major Egyptian gods are painted on the panels in the east. All the hieroglyphics are accurate copies from Egypt, and the room is used by students of the style.

"The woman's face on the capitals is that of "Hathor, goddess of wisdom and love." In Egyptian mythology she was sometimes represented as a cow, which is why she has a face of a woman but the ears of a cow." 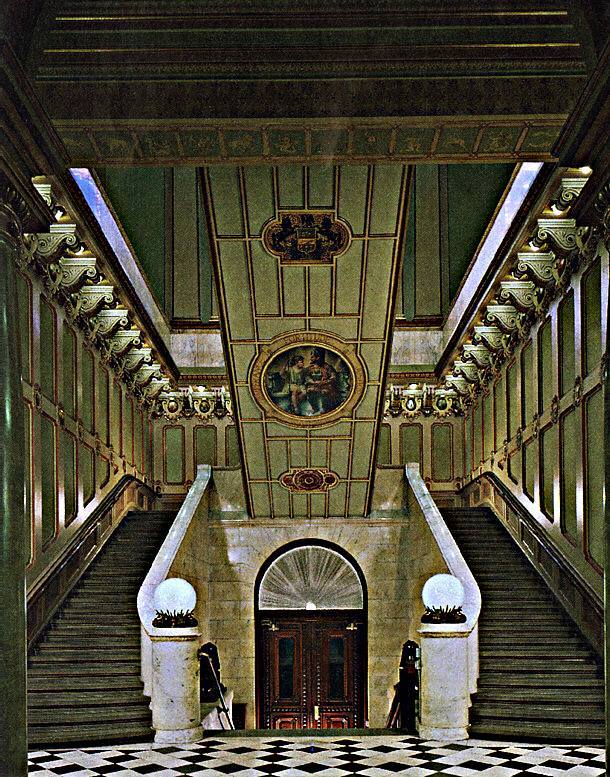 "The Grand Staircase leads to the second floor at the north end of the building. It also leads to Corinthian Hall, the meeting room of the Grand Lodge of Pennsylvania.

"The stairway is made of Tennessee marble. Look up under the staircase. Here you see the Seal of the Grand Lodge, the Great Seal of Pennsylvania and representation of the four cardinal virtues -- Temperance, Fortitude, Prudence, and Justice.

"We'll go upstairs later. Right now, let's walk to the northeast corner of the building and look to see if the Grand Master is in his office..." 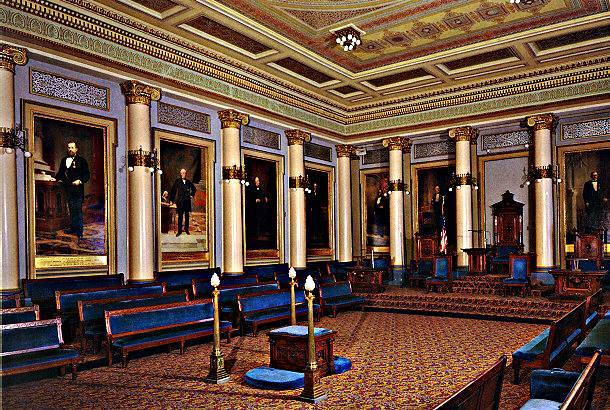 Ionic Hall, decorated in 1890, takes its name from the style of architecture from Ionia, where King Ion reigned in Asia Minor. Ionians were mostly Greek emigrants. Refinement and elegance are characteristic of Ionic style.

"The ceiling of Ionic Hall represents heaven. In the center shines the noon-day sun, surrounded by signs of the planets and stars. The signs of the zodiac were often used decoratively by the operative masons of the Middle Ages in Europe.

"The clock on the west wall is one of the oldest in the Temple. It was made in 1874 and is still keeping time." 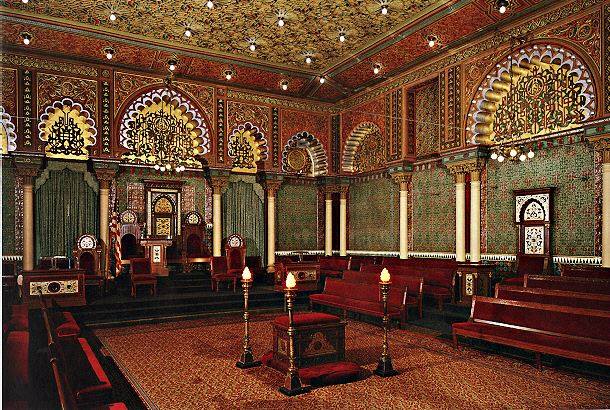 Oriental Hall was decorated in 1896, in the Moorish, or Saracenic, style. The colors and decorations were copied from the Alhambra in Granada, Spain, a 13th Century castle.