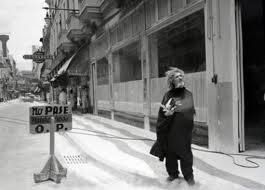 First years López Lledín was born in the ... town of Vilaseca, in the municipality of Fonsagrada, province of Lugo, Spain at 11:00 AM on 30 December 1899. His father was Manuel López Rodríguez, also born in Vilaseca, and his mother was Josefa Lledín Mendez, born in Negueira in the same Municipality and Province. They were owners of a small villa with vineyards where they produced wine and spirits. He started primary school at age 7 in Negueira and completed half of his secondary education. López Lledín arrived in Habana on 10 December 1913 at the age of 12 aboard the German steamship "Chemnitz". There he stayed with his uncle (known as AG, a brother in law of his brother Benigno) and his sister Inocencia, who had previously arrived in Cuba in 1910. López Lledín worked at a grocery store in Genios street, owned by another Galician, until he left his uncle's home. He worked as a clerk at a flower shop, a tailor, a book store and a lawyer's office. He studied and refined his mannerisms to get better employment. He worked as a restaurant waiter in the hotels Inglaterra, Telegrafo, Sevilla, Manhattan, Royal Palm, Salon A and Saratoga. According to his cousin Julio, he could even speak some English. Becoming El caballero de Paris López Lledín lost his reason and became "El Caballero de Paris" when he was arrested in late 1920 and sent to the prison at "El Castillo del Principe" in Habana, Cuba. The reasons are unknown but he always claimed in all interviews his innocence. "El Caballero de Paris" was always vague about the origins of his nickname. Once he said to his biographer that he got his name from a French novel. Another time he claimed that they started calling him "El Caballero" at "La Acera del Louvre" (the "sidewalk of the Louvre"), an area of the Paseo del Prado (Havana, Cuba) where three hotels are located, including the "Inglaterra" where he had worked. Perhaps in his mind he equated the "Acera del Louvre" with Paris. He said Habana was "very Parisienne" and that he was "a Musketeer, a Corsair and a Knight (es: Caballero) of Lagardiere". He stated that "Paris is well known in Habana" and that "many Cubans had become famous in Paris, such as Marta and Rosalia Abreu of Santa Clara". Others say that at one time he worked at the "Paris" (Havana, Cuba) restaurant and, when he returned saying that he was a "Caballero" and "King" the clients started referring to him as "El Caballero de Paris". Others say it was due to the French style of dress which he sported in his ramblings. Still others relate that it was given to him by the weekly humorous/satiric publication "Zig Zag". El Caballero"'s sister Mercedes state that "El Caballero" got his nickname due to a girlfriend from Paris, who was killed during her trip to join him in Habana. The street wanderer El Caballero de Paris wandered the streets of Havana for many years and there is where he got his notoriety. "El Caballero" never traveled outside of Havana after he became mentally ill. Several times he was arrested and once, or maybe twice, he was bathed and his hair was shaved completely, but the reaction of the public when the event was reported by the press, resulted in his immediate release. In 1941 he was briefly interned in the Mental Hospital at Mazorra, but was released immediately by Presidential order. One well known anecdote happened on television: In 1953, El Caballero de Paris, together with several other well known street persons, including "Bigote de Gato" and "La Marquesa", were invited by Gaspar Pumarejo, Cuba's TV pioneer, magnate and variety show host, to serve as a panel of judges in his live TV program "Escuela de Television" (TV School). At the end of the program, Pumarejo decided to reward the panel by giving $20 to each. When he tried to give the money to "El Caballero", the latter responded "Neither my feelings nor my high position allow me to accept this money. I give it to Bigote de Gato for a party that he will give in his establishment." Pumarejo, taken aback, paused a moment and then asked "Why don't we give it to the National Orphanage?" to which El Caballero replied "Well, lets donate it...but what are the rich and the government doing who are supposed to take care of the Orphanage? This is an act of charity and it is not right that the children of the orphanage should receive alms." In 1949, he declared for the "Bohemia" magazine "I am the king of the world because the world is always at my feet." Last years and deathOn 7 December 1977 he was interned in Mazorra's psychiatric hospital because of his deteriorating physical condition. During his stay at Mazorra he was given physical, laboratory and psychological tests and also suffered a hip fracture as a result of a fall. He was diagnosed from his psychatrist, Dr. Calzadilla as suffering from paraphrenia, sometimes considered a form of schizophrenia. He did not suffer from hallucinations. He died in Mazorra at 1:45 AM on July 11, 1985 at the age of 86. He was initially buried in the cemetery of Santiago de las Vegas in Habana. His remains were later exhumed by Eusebio Leal, the Historian of the City of La Havana, and transferred to the convent of St. Francis (now a concert hall and museum), his current resting place.