We went inside the Freemasons' Hall as part of Open House weekend. I've been wanting to go for a while as secret societies and conspiracy theories fascinate me. Plus when I used to work nearby I would often see men with matching ties and briefcases go inside the Hall for clandestine meetings.


Actually the Freemasons' Hall was disappointingly un-secretive, the Masons were very welcoming and inviting towards visitors. There's even a museum an information booklet and regular tours. So much for conspiracy theories and world domination plots. If you want to know more about the Freemasons their website is suitably vague/informative or you could always read Freemasonry for Dummies which was available to buy in the gift shop.

Symbolism is important to the Freemason society, five and six pointed stars can be found all over the building.

The five pointed star,the 'pentalpha', represents the five points of Masonic fellowship. For Pythagoras (an important figure to the masons) it was symbol of perfection and the universe. The Pentalpha is also an ancient emblem of good luck and health.

The six pointed star, the 'hexalpha', (common also in Jewish faith, the star of David) is for Freemason known as the Seal of Solomon and is the badge of Royal Arch Freemasonry.

Other important Masonic symbols include:-

wheat = resurrection
lotus = waters of life
irises = eternal life
The celling in the Grand Temple was really impressive and loaded with Masonic imagery and symbolism.

Southern side:
Corinthian pillars (representing beauty), the All-Seeing Eye, the hexalpha (star) and Helios, the sun God driving his chariot

Eastern Side:
Ionic pillars (representing wisdom), the Ark of the Convent, Jacob's Ladder, King Solomon and King Hiram, who built the first temple in Jerusalem.

Resting against Jacob's ladder is the Volume of Sacred Law (any holy book displayed at a lodge meeting), a cross (faith), an anchor (hope) and a burning heart (charity). The golden squiggle at the top is the Hebrew character for YOD (Jehovah).

Western Side:
Doric pillars (representing knowledge), the moon and serpent (ancient symbol of wisdom), Euclid and Pythagoras. The misshapen square thing is the 47th Proposition of Euclid  which is a symbol worn by a Past Master of a Lodge

Though it claims to be a secular organisation the Freemasons use a lot of religious imagery. These stained glass windows tell the seven day creation story.

The present building is the third Masonic development on the site and was constructed as a memorial to those who died in the war of 1914-1918. Therefore there is a shrine to the armed forces near the entrance to the Grand Lodge

In addition to some ceremonial rooms we also had access to the Freemasons' library and museum. The museum had displays of regalia and also proved that they will stick Freemason symbols on anything, including light-bulbs.

There is also a gift shop where you can buy all sorts of Masonic memorabilia, including socks, aprons, books and cuff links.

If you fancy paying The United Grand Lodge a visit, the library, Museum and the Grand Temple are free of charge and open Monday- Friday 10:00-17:00. The nearest tube is Holborn.

Re: Freemasons' Hall, The United Grand Lodge of England 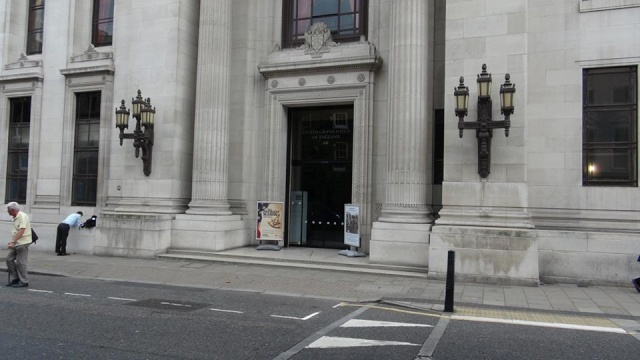 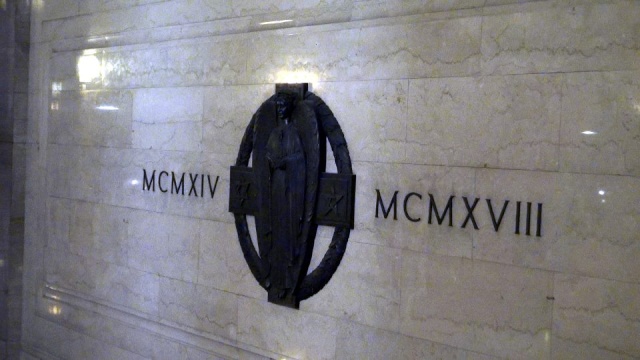 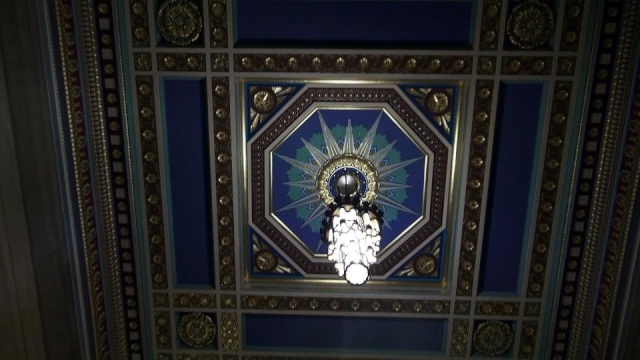 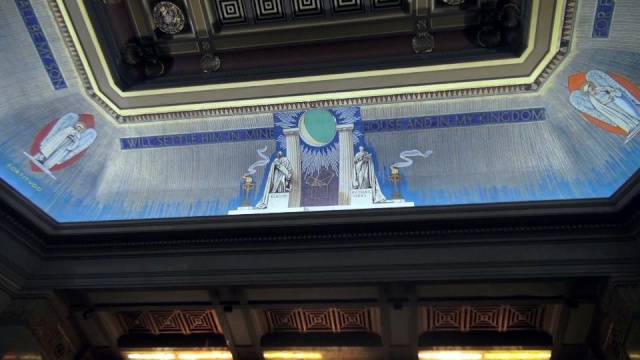 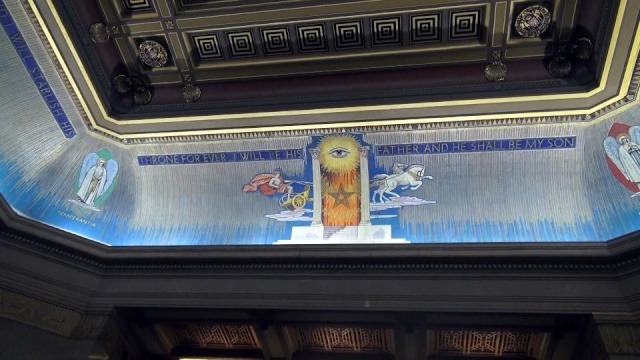 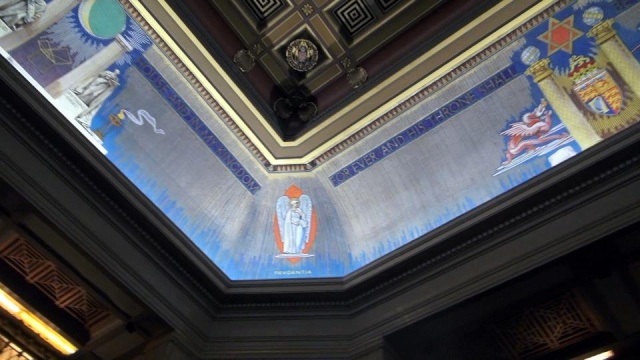 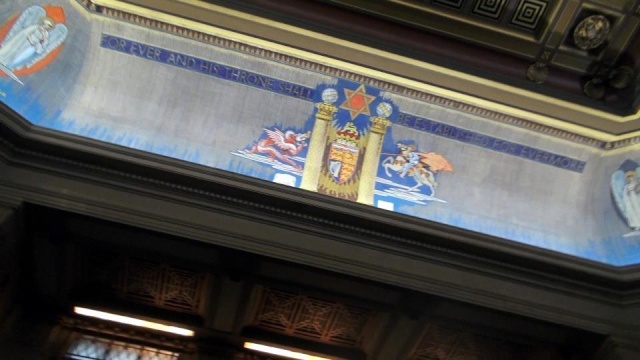 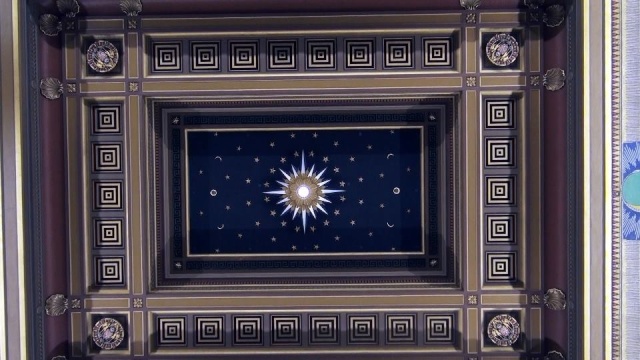 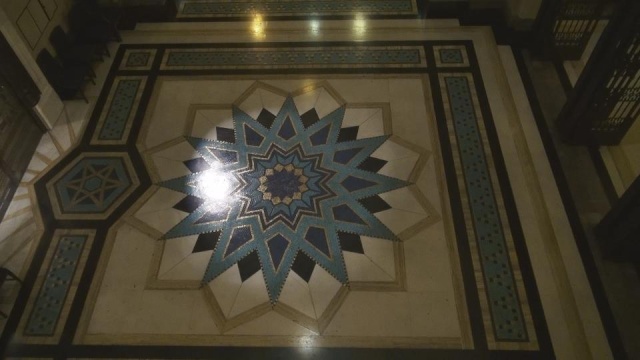 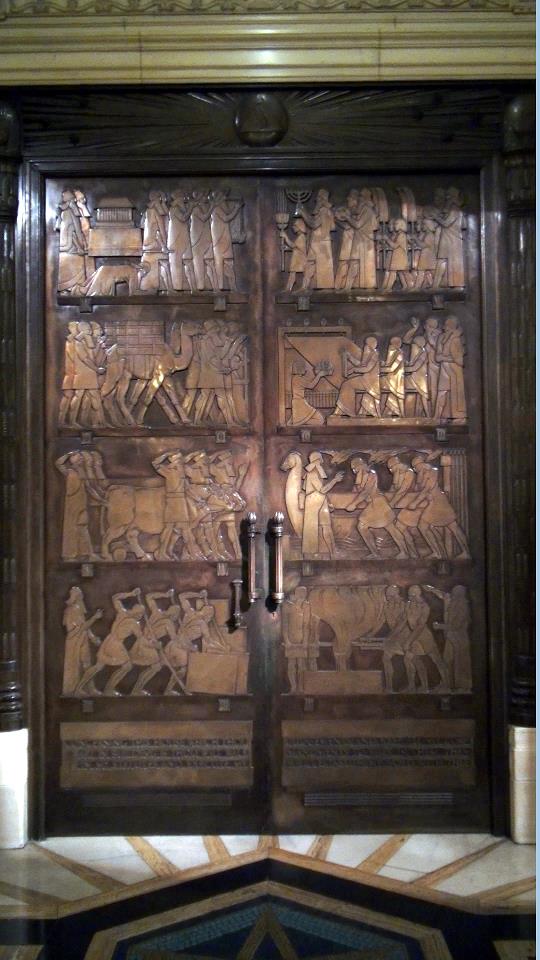 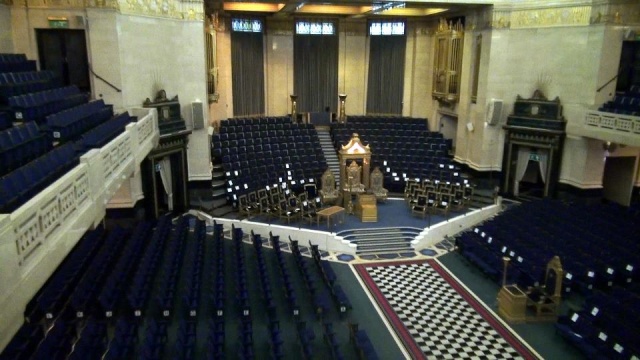 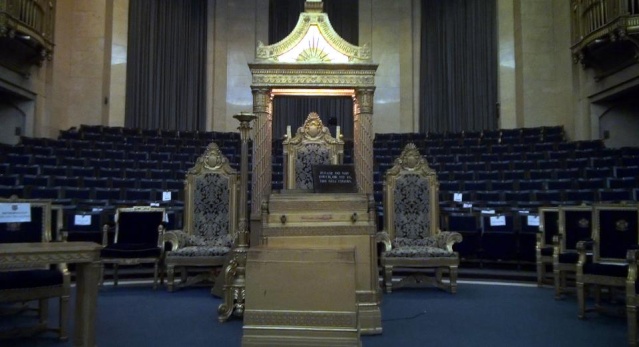 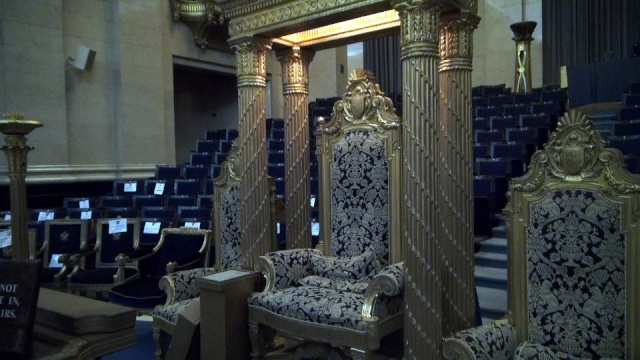 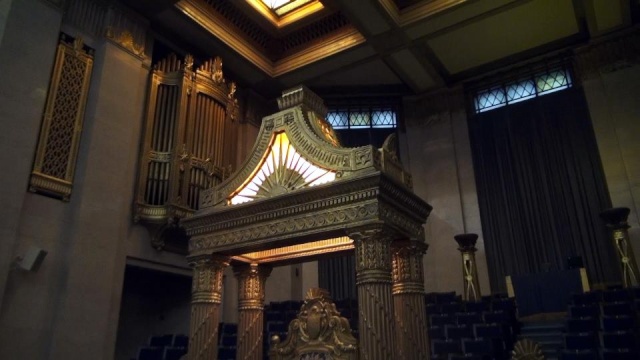 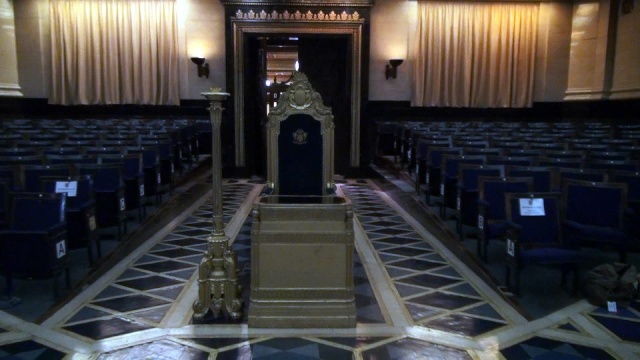 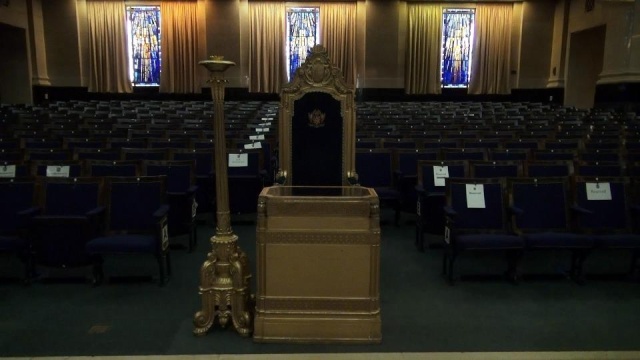 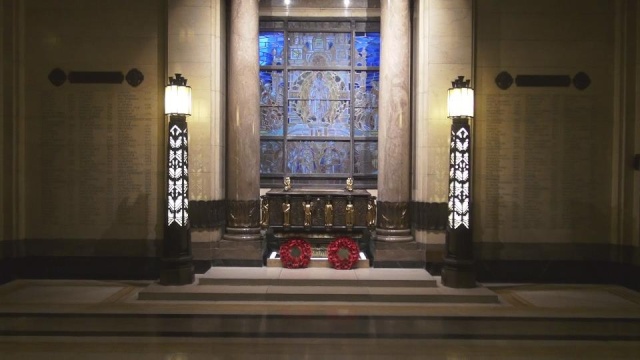 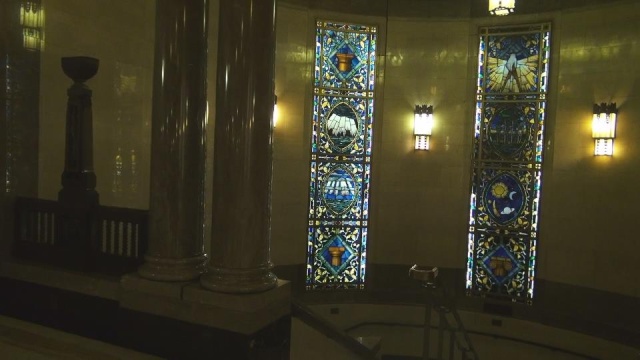 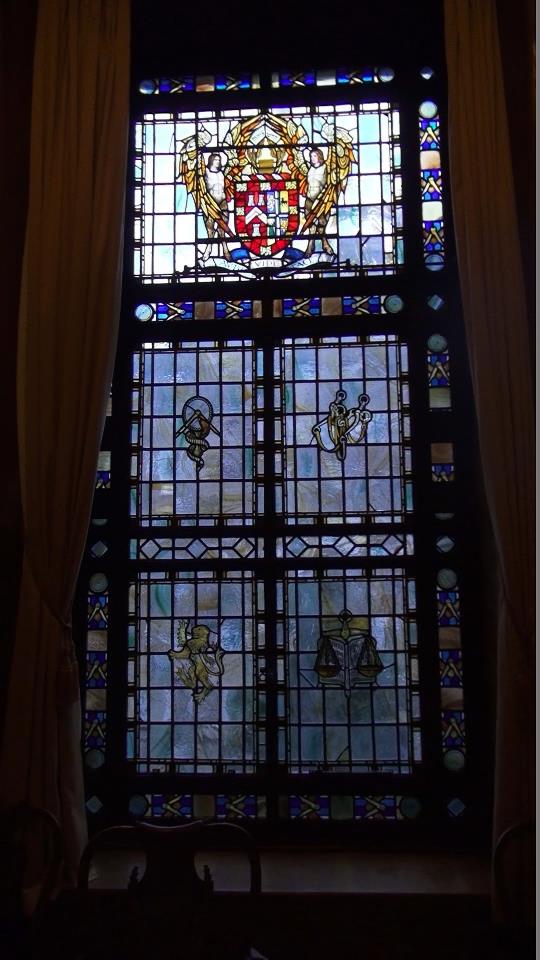 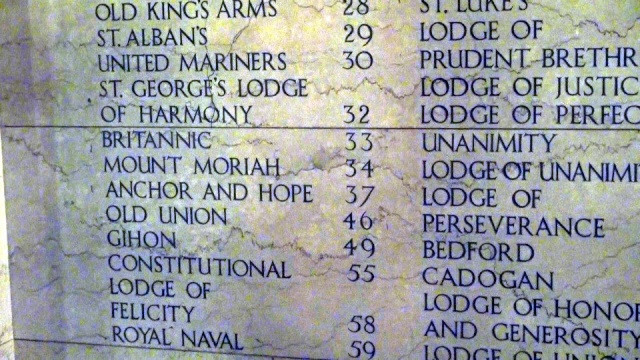 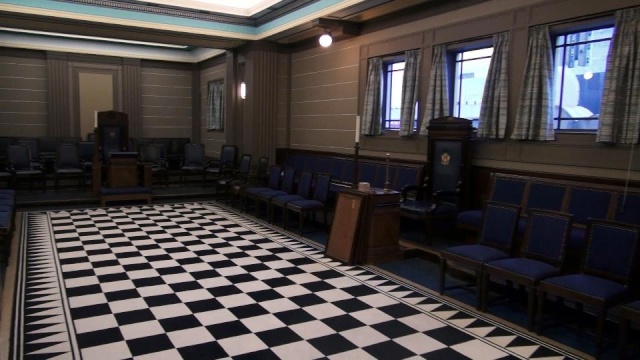 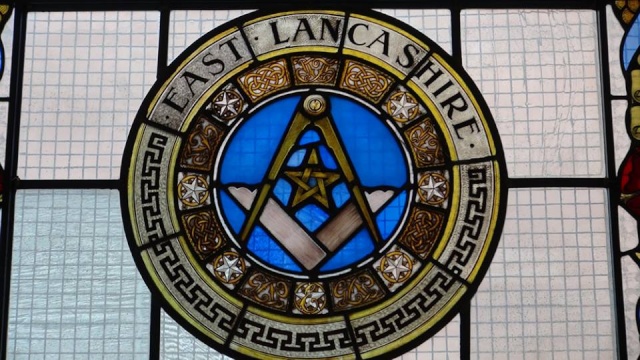 Re: Freemasons' Hall, The United Grand Lodge of England